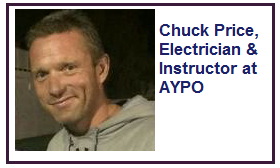 When you take a class online, it might feel − at times − as if it’s all been created by some kind of faceless machine. Of course, that’s not true – at least, here at AYPO, it’s not. And we couldn’t be much luckier than to have Chuck Price as the man behind our classes for electricians. You get to see him in the videos he records for the classes but it’s not quite the same as meeting him personally or sitting in a room where he provides instruction directly.

I had a chance to sit down with Chuck recently to talk about himself – after watching him spend literally months of intense work on the class covering changes to the 2017 NEC. The depth of his concern to get the class as good as he could get it and of the intensity of his focus on how students might respond to the class had already impressed me. What I wasn’t prepared for was how modest and funny he was to talk to about being a working electrician as well as an instructor for online classes. The following is an excerpt of our conversation:

Peter Quince: Hi Chuck. Thanks for coming by. So, our students may not be aware that you have a day job, as well. You work for the local hospital, isn’t that right? What’s your official title there?

Official? Officially, I’m an electrician. Where I work is –  I work for Asante Rogue Regional Medical Center. I’ve been there for 12 years. I travel between our three major facilities. I’m the only one to do that.

PQ: What would be a typical work day?

Well, geez, a typical work day, well, it’s changed quite a bit over years… The typical work day for me would be to show up at my workplace and determine if there are any major issues that need to be addressed right away. Beyond that, I have projects that I work on every single day. So, each day it changes. I have many projects that I work on – sometimes in the planning part of construction to some light maintenance. It really varies. But, you know, a lot of electricians will show up to work knowing that – hey, today I’m gonna be anywhere and everywhere and that’s one of the benefits that a lot of guys like. They’re not stuck in one spot.

PQ: How did you become an electrician? What made you want to do this?

I was in a completely different industry before – I was in the grocery business. I was 22 years old. I had a customer who came in and I just built a relationship with him; got more interested in what he did and found out he was an electrician. He went ahead and gave me his phone number. Much to his surprise, I called him that evening and found out all the details on how to become an electrician and two weeks later I was putting in my notice to leave the grocery business and went to work for one of the area’s largest electrical contractors. So, I left that job when I was 22 and started the apprenticeship when I was 23.

PQ: Was that here in Southern Oregon?

PQ: You told me once that you ran a small crew and did a lot of different things. How’d that come about?

Well, in my fifth year of apprenticeship I was put in charge of three guys and given the responsibility to construct an x-ray wing of a hospital, which afforded me a lot of experience of management in the construction trade as well as the technical skills I got to acquire. This in turn carried me into my journeyman years. I quickly was made foreman. Among other things my crew and I worked on is we ran traffic signals. So, we had to adhere to state requirements as well as the NEC. Along the way, I worked with a variety of different contractors and superintendents from the underground phase of a building to the completion phase, so I dealt with a lot of different demands. It also meant having a specific type of relationship with end users and their last-minute issues.

PQ: Did you ever get a really bad shock?

PQ: What was your worst?

Gosh – I don’t know if this is publishable [laughter from interviewer], but I was trouble-shooting a problem with a lighting circuit that was 277-volt; very minimal access to the area; there was some additional staff in the area as well, so it was a very difficult situation. It was required for me to do the trouble-shooting for the power to be on to identify where the problem was… I found a factory wire not connected properly. It was a new building that had just been turned over two weeks prior and, unfortunately, I was utilizing the sprinkler pipe in the same area for some additional bracing while I was on the ladder and so the 277 hit, went through my left arm all the way through my chest and into my right arm which was on the sprinkler pipe… It didn’t hurt so much when it happened. Probably two to three hours later it felt like I’d been in a car accident. My upper left-hand side was very, very sore from all the contractions when I was shocked… Whenever you get a shock, it definitely gets your attention.

PQ: Do you enjoy working on the classes here at AYPO?

It’s a real joy. This whole thing has been a wonderful opportunity in the sense that it sharpens my skills within the code books and for what’s covered in some of the other classes that we provide. It helps me to better understand when the code changes do come out to really address them and really getting down to them at a real meat-and-potatoes level. What it does is… You know, what most electricians will do is look at it one of two ways – just want the class to get through the class in as little time as possible while other guys will want to know what the changes really are and understand what those changes are. I’m no different. So, for me, [teaching] is really an opportunity to not have a choice and to really benefit from that. It also feels good to able to put my little bit of flair into [the classes] and, you know, my understanding of the concepts – doing that is something I really enjoy. It’s also really great to know that I’m getting to talk to a lot of other guys and help them get what they need for their jobs.

PQ: Has anything surprised you, working on the classes?

How in-depth we have to go to really make these classes work. The amount of effort we put into it. That has surprised me. You know – I take a great deal of pride in what we are producing and so therefore – yeah, you could look at it as very lackluster, but I think the fact that it takes as much effort as it does to put the product out there that we do has been a surprise.

PQ: What does your family think about what you do?

I have two boys. And my oldest son just thinks I walk on water. He thinks that what dad does is just super cool. He’s seen dad help people over the years and seen the projects that I’ve worked on and built – ran a crew as a foreman and brought home the company vehicle which he thought was cool. But my youngest son – he’s not as focused on what dad does. He thinks it’s okay and all but he doesn’t really give it much thought. He’s 11.

PQ: What would you say to a young person looking at a career in electricity?

You know, that question has come up numerous times in my career and it’s really depends on the individual. I tend to gauge the individual who’s asking. Because this industry, it has challenges. It requires a lot of common sense. A lot of educational smarts along with physical abilities. You know, a lot of folks that join the electrical industry are former military trained because they’ve already got a lot of those qualities. So, for a young person who’s never seen that before, I always tell them it’s a great trade. But, I also caution them or at least let them know that the trade itself is not an easy one.

For me, it was a five-year apprenticeship. You have a lot of learning you have to do. Like I said, from an educational standpoint, from a physical standpoint it asks a lot. You know, the thing is that, now in our industry there’s been a growing concern for safety, as it shows in the code book. And, because of that growing concern for safety, we are less likely to work with live equipment than we ever have before. So, the industry has changed in that way. But, you learn even how to work smarter. That’s why you need years in the field along with the code stuff to work safe.

PQ: What is the development in the electrical industry you’re most excited about?

I would state that, as exciting as it is, I have concerns that – sometimes – it may reduce the number of electricians that’s required in 20 or 30 years, but the basics of our trade will still be there, regardless. But, that is very exciting with automation of homes and businesses. Utilization of PLCs and frequency drives in industrial applications and furthermore it’s being applied even in fast-food industries. You know, some of the electrical things that we’re doing in with automation, it becomes more of an electronics standpoint but a lot of stuff applies where we start. So, I think that that modification in our industry is probably been the most exciting but it’s equally scary – until we see how it impacts us, it’s exciting for now.