What HVAC Technicians Need to Know About HFOs, HCFCs, HFCs, and the Kigali Amendment

What HVAC Technicians Need to Know About HFOs, HCFCs, HFCs, and the Kigali Amendment to the Montreal Protocol on Refrigerants

As someone who works in continuing education for HVAC technicians, it’s my job to keep up with the latest news. I need to know what’s changing or due to change so that you all will know it, too. Some of it is pretty straightforward. The 2018 IMC, for example, is two years into its three-year cycle. The Technical Committees release their proceedings each year and I try to follow along so I can be ready to talk about upcoming code changes in HVAC continuing education classes.

So, a lot of it is straightforward. Then, every once in awhile, a landmark change happens. Everything shifts. We can’t forget those dates when it all goes a whole new way. The Montreal Protocol of 1987 was one such landmark date.

And we’re about to have another. Here’s a still frame from an October 15, 2016 New York Times story on the Kigali Amendment to the Montreal Treaty. 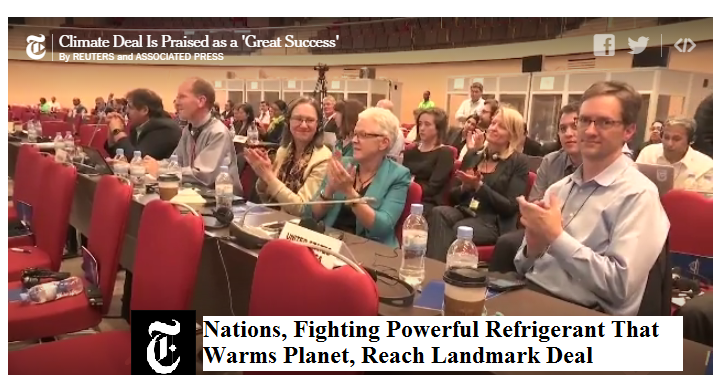 All of you must have heard SOMETHING about the Kigali Agreement by now. You may be wondering: will the changes will be far-reaching? Yes. Does anything else need to happen before the changes are adopted in the U.S.? No. The changes are already adopted by the United States. No action by Congress or any other body is required. Why is that? Because this is an amendment to the original Montreal Treaty, already ratified by Congress, and that Treaty allowed for precisely this type of amendment.

Most of us are familiar with recent history. After the Montreal Protocol (based on solid scientific findings about the impact of CFCs on the ozone layer) took effect on January 1, 1989, CFCs were phased out. It turned out to be a remarkable success story as HVAC technicians, industry, and regulators working together to literally change our world. The replacement for CFCs were primarily HCFCs and HFCs. HCFCs and HFCs are also ozone depleting BUT at so much lower level that the ozone layer regenerated. Alongside this success was a second positive impact as air conditioning and refrigeration became more efficient and more effective.

The only problem – HCFCs and HFCs (it so happens) are powerful greenhouse gases, with more than 1,000 times the heat-trapping potency of carbon dioxide! [See this article.]

Did we save the planet only to find a new way to destroy it? The ozone layer is better but global warming kills us all anyway? And, most importantly of all, now what?

It turns out that industry, researchers, and regulators always knew HCFCs were a “transitional solution”. And for over a decade, many folks have been busy on so-called “fourth generation” refrigerants, particularly HFOs that promise heightened efficiency and effectiveness even when compared with HCFCs and which also dissolve after a few days when no longer under pressure so that their Global Warming Potential (GWP) is very small. Chemicals that dissolve can’t rise into the stratosphere and trap heat within. HFOs may, therefore, be the magic bullet!

If there ever is such a thing as a magic bullet. Of course, nothing comes free in this world, so HFOs have their own problems, as do so-called “natural refrigerants” which are another alternative (see this article). 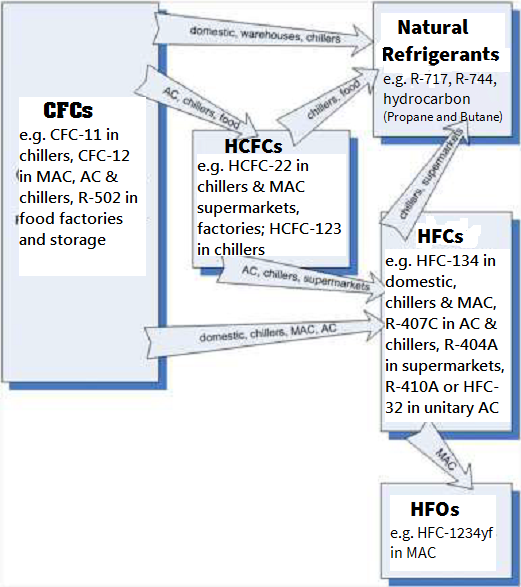 The article you’re reading now is the first in a series on the upcoming changes to regulations on refrigerants. It’s meant for anyone who has recently taken a continuing education class, anyone who will be needing to take a continuing education class soon, someone hoping to become an HVAC technician, or just someone curious who wants to know more about it. Along the way, here are some of the questions we’ll be looking to answer:

1. When do the changes become mandatory?

2. What refrigerants will no longer be available?

3. Which new ones will take their place? How much will they cost? Will they be hard to come by? What are the downsides or challenges of HFOs?

4. How much retrofitting will be necessary when replacing with a new refrigerant?

5. Will new training or certification be required?

For today we’ll just look at question #1: “When do the changes become mandatory?”

The answer is: The first date to be concerned with is January 1, 2018. That’s when the first regulatory changes take effect. The next date is January 1, 2024. That’s the date by which all the changes will have taken full effect.

As with the changes initiated by the Montreal Treaty that first took effect on January 1, 1989, we’re all working together on this one. Industry, HVAC technicians, and the EPA aren’t battling each other. Instead, we’re all cooperating in order to be flexible and responsive to the demands of customers, the needs of working HVAC technicians, and the responsibility to protect the environment. Organizations that develop mechanical codes and standards (ICC, IAPMO, and ASHRAE) are on board, as well. For example, researchers and regulators recognize that simply replacing HCFCs and HFCs with HFOs (which have a much lower GWP) may not work in the existing equipment that HVAC Technicians service. Therefore, efforts are going into creating hybrid refrigerants that combine HFCs and HFOs to meet regulatory needs without requiring wholesale retrofitting or replacement of appliances and equipment.

To sum up: we all have a little time but not much. Please check back in a few weeks to see the next article that addresses some of the other 5 questions listed above. You can also check with www.atyourpaceonline.com to see if we can help you out with your continuing education needs. And please feel free to write me at peter@atyourpace.online with your questions and comments.

I look forward to working together with you all as we take this next step in HVAC. Hope to see you all again soon. [See below for a quick glossary of refrigerants.]

Chlorofluorocarbons were banned by the Montreal Protocol because of significant damage to the ozone layer. They were replaced by HCFCs, which also deplete the ozone layer.

Hydrochlorofluorocabons adopted decades ago as replacements for CFCs because they did less damage to the ozone layer, but like CFCs are extremely potent greenhouse gases. They are being phased out by the Montreal Protocol but are still used heavily in many countries, especially developing countries, and in many cases are being replaced by HFCs, which are also greenhouse gases.

Hydrofluorocarbons are fluorinated compounds commonly used as refrigerants. Over the past twenty years they have become popular replacements for CFCs and HCFCs, which are being phased out by the Montreal Protocol because of damage to the ozone layer. While HFCs do not destroy ozone, they are potent global warming gases. The most common HFC, R134a, has a global warming potential 1,430 times greater than CO2.

Hydrofluoroolefins (HFOs) have been developed in the past 20 years. They have zero ozone depleting potential (ODP) and very low GWP, but some of them are mildly flammable. values. Two commercially available HFOs (HFO-1234yf with a GWP100 of 4 and HFO-1234ze (E) with a GWP100 of 6) have been used primarily in Mobile Air Conditioning (MAC) or industrial and commercial installations; additional HFOs that will serve these and other markets are under development.

For specific HVAC courses, please see tradesmance.com and click to your state link.